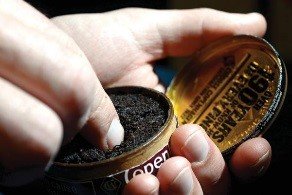 Chewing tobacco comes in the form of loose leaf, plug or twist but it is typically shredded like short cut grass, generally mildly acidic and is intended to be chewed throughout the day.  Chewing tobacco is placed between the gums, teeth, or cheeks, and as the name implies, chewed for consumption.

Snuff is chopped into particles like large coffee grounds, and it can be dry, moist, or in sachets (tea bag-like pouches).  Snuff users will typically place the product between the gum and cheek then suck on the tobacco and spit out the tobacco juices.  Some forms of snuff are sniffed or inhaled into the nose.

Snus is a variant of snuff and is processed differently and come in moist snuff packages that resemble tea bags and must be kept refrigerated.

Dip is placed on the lower lip and gums that tend to cause extra saliva when dipping.  The nicotine is absorbed through the mouth. And the juices that are formed when dipping are sometimes swallowed or spat depending on one’s preference.

Exercise is one of the best ways to help safeguard your health against Colorectal Cancer !

Reducing your stress level by exercising is one way to help in the fight against Colorectal Cancer.